The result was not on my side, so I just kept working - Jiri Prochazka answers if he feared he was losing against Glover Teixeira in the first fight (Exclusive)

The result was not on my side, so I just kept working - Jiri Prochazka answers if he feared he was losing against Glover Teixeira in the first fight (Exclusive)

Jiri Prochazka became the light heavyweight champion by dethroning Glover Teixeira via fifth-round submission in the main event at UFC 275. 'Denisa' was losing on the scorecards before he submitted the jiu-jistu wizard with a rear-naked choke with less than half a minute left in the fight.

In an exclusive interview with Sportskeeda MMA, Andrew Whitelaw asked Prochazka if he felt the fear of loss at any point in his first encounter with Teixeira. While Prochazka denied having let the fear of loss enter his head, he admittedly knew that he was losing on the scorecards.

According to Prochazka, an embodiment of the Bushido Samurai spirit, one must maintain a positive mindset in such situations and try to find ways to win. The UFC light heavyweight champion told Sportskeeda MMA:

"Never. No. In the fight I know it's on the point. Like, the results is not on my side, so I just kept working. Like that's the only thing that you can do in this situation. You just have to keep working. Keep working, keep working with positive mind, to find the winning setup."

Jiri Prochazka and Glover Teixeira went toe-to-toe right from the get-go in their meorable clash. Despite both fighters looking exhausted as early as the second frame, the fight went on to the championship rounds.

While all three judges gave the first two rounds to Teixeira, two of the judges were divided about the third and fourth rounds. Although Prochazka might have been losing on the scorecards, Teixeira was arguably the worst for wear going into the final frame.

Jiri Prochazka is now slated to make his first title defense in a rematch against Glover Teixeira at UFC 282 on December 10. Having spent almost the entire twenty-five minutes inside the octagon in their first encounter, Prochazka was asked how he expects the rematch to play out in the same interview.

'Denisa' admitted that his previous experience with Teixeira will definitely benefit him. However, the former RIZIN champion is well aware of the fact that his opponent will benefit from the experience as well.

Having put on an iconic war in their initial encounter, Prochazka expects his rematch against Teixeira to be on an entirely different level. The 30-year-old further told Sportskeeda MMA (2:46):

It’s official. Jiri Prochazka ( @jiri_bjp ) will defend his UFC Light Heavyweight World Championship in a rematch against Glover Teixeira at UFC 282 on Dec 10 in Las Vegas. 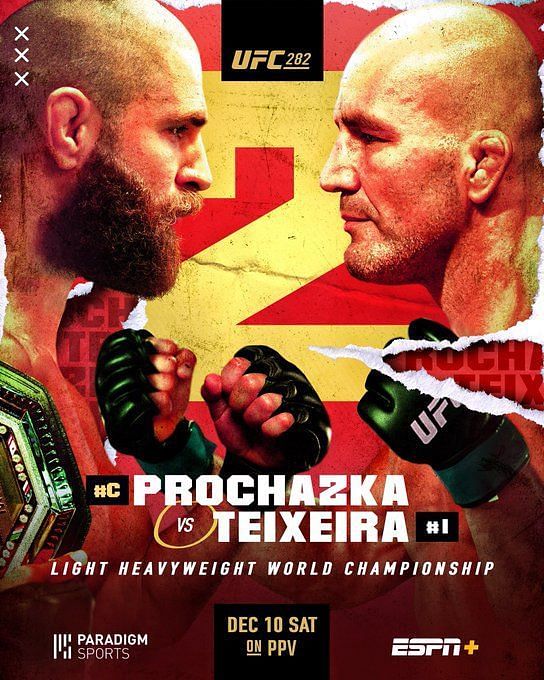 Tag: Light Heavyweight World Championship, Glover Teixeira Jiri Prochazka.
Related News
The result was not on my side, so I just kept working - Jiri Prochazka answers if he feared he was losing against Glover Teixeira in the first fight (Exclusive)
Glover Teixeira Battles Personal Feelings for UFC and Dana White After Being Robbed of a Title Shot at UFC 282
Glover Teixeira reveals stomach issues that plagued him just hours before Jiri Prochazka fight
Jiří Procházka asked for Glover Teixeira rematch to improve on the ‘worst fight’ of his career
‘The Czech Samurai’ Ready To Avenge His Worst Fight at UFC 282
Volkan Oezdemir happy for ‘pretty interesting’ UFC 282 title rematch between Glover Teixeira, Jiri Prochazka
I tried to do what Conor McGregor and Anderson Silva is doing right now - Andrei Arlovski explains why he wouldn't focus on two sports at once
Hot Tweets: What Kayla Harrison losing means for the PFL
Jiri Prochazka went 3 days without food in dark room to confront ‘demons,’ train his mind
“That was the craziest several hours” – Jan Blachowicz releases statement following crazy turn of events leading up to UFC 282
Jan Blachowicz recounts being ‘the last person to know’ about UFC 282 title fight
Why did Glover Teixeira turn down a fight against Magomed Ankalaev when his rematch against Jiri Prochazka fell apart?
Latest News
Joe Rogan: Conor McGregor ‘looks like his piss would melt that USADA cup’
Carlos Condit once knocked out a special forces operative who sucker punched him in Afghanistan then had last fight on Conor McGregor undercard
Gordon Questions Whether Paddy Pimblett ‘Deeply Cares’ About Mental Health
MMA Fighters React To TJ Dillashaw’s Retirement
Bryce Mitchell vs. Ilia Topuria full fight preview
Paddy Pimblett threatens to drop Jake Paul on his head and kick him in his face
CORVIA MEDICAL ANNOUNCES RANDOMIZATION OF FIRST PATIENT IN THE RESPONDER-HF CONFIRMATORY TRIAL
UFC icon Conor McGregor suggests he and Nate Diaz go into business together after sending death threat to Dustin Poirier – who is in hospital battling an infection
Addionics Applauded by Frost & Sullivan for Improving Rechargeable Battery Architecture with Its Smart 3D Electrode Technology
Conor McGregor vows to put Dustin Poirier "in a box" while rival lies in hospital bed
ADAMA to Acquire AgriNova New Zealand Ltd.
NEC Ibérica and NEC Laboratories Europe advance data space and 5G technology research with a smart campus for the University of Murcia
Great Place to Work® recognizes Xoxoday for its people-first culture
Midnight Mania! ManningCast reacts to Dana White’s Power Slap: ‘I’ve got to get in this thing!’
UFC 282 predictions: Early ‘Prelims’ undercard preview