Jiří Procházka knows that his first fight against Glover Teixeira – the one that gave the Czech powerhouse his UFC light heavyweight strap – could have gone either way.

That’s why he asked for the rematch.

That’s why the two men will square off again at UFC 282 on December 10 in Las Vegas. Fighters like Teixeira who lose their UFC titles without any defences do not usually receive immediate rematches – but Procházka has a point to prove.

Despite beating Teixeira at UFC 275 in what many consider to be the best fight of the year, Procházka was critical of his own execution. He was down on two of the three judges’ scorecards heading into the final round. He had to survive multiple submission attempts and was also badly hurt on the feet in the fifth round.

He won by submission with just 28 seconds left in the fight. And he knows he can do better.

“It was the worst fight in my career. I’m seeing that from my attitude, my angle. On my worst night, I was the best. Now I just feel I can show my best performance, what I really am,” Procházka told TheAllStar.

“Of course, Glover showed a great performance so he deserves the rematch. The first fight was 50/50. That’s why I gave him this opportunity.”

Procházka’s aggressive, unorthodox style has brought him UFC championship gold but it has also made him vulnerable in fights. An example of this is his tendency to throw flying knees, which resulted in him getting taken down multiple times by Teixeira.

The 30-year-old believes that he did not have the right mentality in that contest but thinks he can learn from where he went wrong and can rectify this in the rematch.

“My attitude to the fight was bad. I just know what to do right now and I’m looking forward to this fight,” Procházka said.

“This fight showed me my weak points in the wrestling, in the ground game, and the stand-up. Nobody talked about my stand-up in this fight. I am the primary stand-up fighter but he caught me many times. I will not repeat this.”

Procházka shocked many fans by giving Brazilian jiujitsu black belt Teixeira his first-ever submission loss and has said that he could try to beat Teixeira on the ground once again.

“I showed I can be good in wrestling and jiujitsu, to be on the same level with him. Everybody knows my stand-up but nobody knows my jiujitsu and wrestling. I will show in all these levels that I am much better because I am making the steps to be better and better every day.”

Jiří “Denisa” Procházka is a 29-year-old male fighter from the Czech Republic with 29 pro wins and 3 losses. Procházka most recently fought Glover Teixeira at UFC 275: Teixeira vs. Procházka on Saturday June 11, 2022. 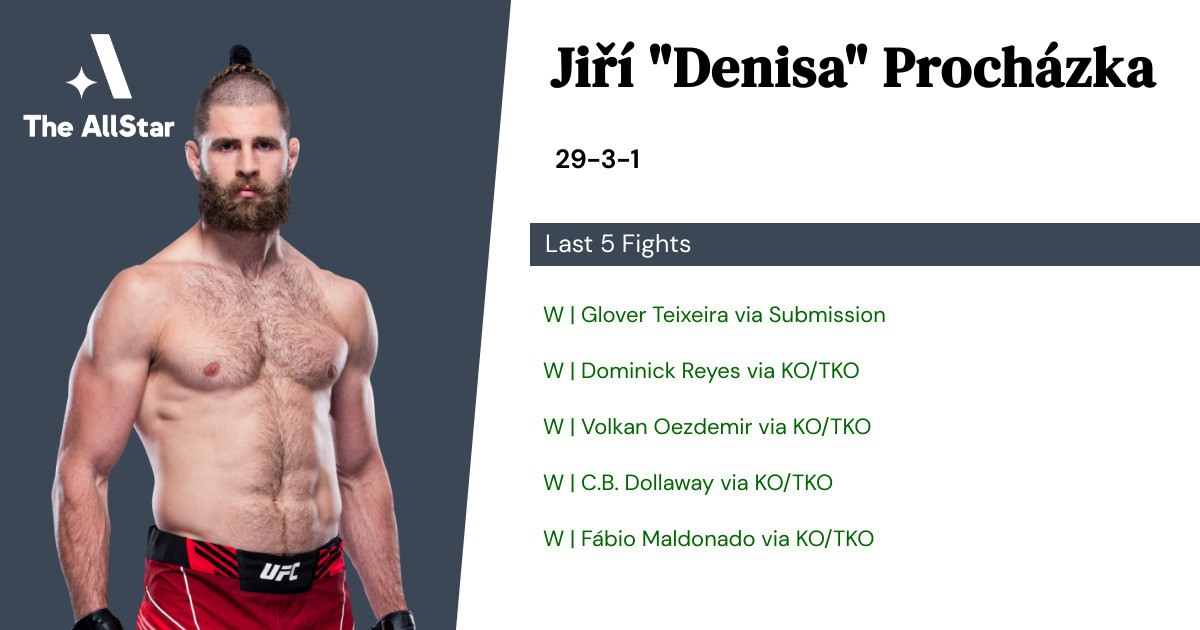 Jiri Prochazka has gone 5-0 in the last 5 professional MMA fights.

Win vs Glover Teixeira • Submission R5 4:32 • 2022-06-11 Win vs Dominick Reyes • KO/TKO R2 4:29 • 2021-05-01 Win vs Volkan Oezdemir • KO/TKO R2 0:49 • 2020-07-11 Win vs C.B. Dollaway • KO/TKO R1 1:55 • 2019-12-31 Win vs Fábio Maldonado • KO/TKO R1 1:49 • 2019-10-12
Tag: Volkan Oezdemir, Glover Teixeira.
Related News
Jiří Procházka asked for Glover Teixeira rematch to improve on the ‘worst fight’ of his career
Glover Teixeira Battles Personal Feelings for UFC and Dana White After Being Robbed of a Title Shot at UFC 282
The result was not on my side, so I just kept working - Jiri Prochazka answers if he feared he was losing against Glover Teixeira in the first fight (Exclusive)
‘The Czech Samurai’ Ready To Avenge His Worst Fight at UFC 282
Jiri Prochazka Eager to Deliver Dominant Performance in Teixeira Rematch; ‘I Know I Can Do That Better’
Glover Teixeira feels UFC ‘messed up’ removing him from light heavyweight title picture: “I agreed to fight both guys”
Glover Teixeira reveals stomach issues that plagued him just hours before Jiri Prochazka fight
Fans Are Not Interested in Nearing Title Fight of Two Warriors, UFC Icon Says
‘The Czech Samurai’ Shares Revelation After Confronting His Demons for UFC 282
I tried to do what Conor McGregor and Anderson Silva is doing right now - Andrei Arlovski explains why he wouldn't focus on two sports at once
Phillies Make the Long Climb Back to the Top
Jiri Prochazka went 3 days without food in dark room to confront ‘demons,’ train his mind
Latest News
LE SSERAFIM Huh Yunjin Becomes Hot Topic For Striking Beauty in THESE Photos
How many WWE Superstars has Ronda Rousey lost against?
Adesanya hoping to headline UFC Africa in 2023: ‘Game ain’t over’
Morning Report: Javier Mendez believes Islam Makhachev ‘needs to clear everyone out’ to earn P4P ranking
The Case for Bonus Slots Not Blocked by Gamstop
Jiri Prochazka explains why he’s still “grateful” despite vacating title and withdrawing from UFC 282
Dan Rafael: Why did Conor McGregor call him 'The Boxing Guy'?
Stephen Thompson vs Kevin Holland UFC Odds, Time, and Prediction
Cboe Europe Derivatives Welcomes New Participants
Sherdog’s WMMA Pound-for-Pound Top 10
Galaxis Launches Highly Accessible NFT Creation Platform
UFC Fight Night Thompson vs Holland: Where to watch Stephen Thompson vs Kevin Holland live? UFC News, UFC Fight Night 216, UFC updates
3 Fighters Who Stand To Gain the Most at ONE on Prime Video 5
Sports on TV, Nov. 28-Dec. 4: World Cup, NFL, NBA, NHL, college football and basketball, and more
KX Supports B2C2 for Trading Analytics, Driving Further Innovation In the Digital Assets Space