Week 7 of the college football season kicked off with a bang as No. 5 Michigan put on a rushing clinic in an impressive victory over No. 10 Penn State.

In action now, No. 3 Alabama is taking No. 6 Tennessee in an all-important SEC tilt, No. 8 Oklahoma State is going up against No. 13 TCU, No. 15 NC State is battling No. 18 Syracuse, and Wisconsin-Michigan State is live on FOX.

Here are the top plays from Saturday's Week 7 slate.

Tennessee got on the board first as Jabari Small ran in the 1-yard-score, putting the Volunteers up 7-0.

Set up by a 33-yard pass from Bryce Young to Isaiah Bond, Jahmyr Gibbs ran in an 8-yard score, evening the score at seven apiece.

The Vols picked up right where they left off. After quickly getting past midfield, quarterback Hendon Hooker hit Jalin Hyatt for a 36-yard touchdown pass. Tennessee led 14-7.

After forcing Alabama to punt, Hooker found Hyatt for an 11-yard touchdown pass, their second connection of the game. Tennessee led 21-7.

Alabama's defense got off the field, but then chaos ensued. Quandarrius Robinson went to retrieve the bouncing punt, but he couldn't corral it as Tennessee recovered the ball, taking over at the Alabama 40-yard line. Three plays later, the Volunteers scored their fourth touchdown of the game, set up by a 31-pass from Hooker to Ramel Keyton. Tennessee led 28-10.

Alabama gets seven back

Young hit Ja'Corey Brooks for a 7-yard score, Alabama's second touchdown of the game. The touchdown cut the Tennessee lead to 28-17.

Gibbs sliced through the Tennessee defense for a 26-yard touchdown run, which cut the lead to two. Then Young hit Brooks for the two-point conversion to tie the game at 28.

After forcing TCU to go three-and-out on the game's opening possession, Spencer Sanders ran in a 29-yard touchdown, putting Oklahoma State up 7-0.

A drive sparked by Max Duggan hitting Quentin Johnston for a 48-yard strike ended with Duggan running in a 1-yard score for TCU. The Horned Frogs trailed 14-7.

Sanders had been doing it with his legs for the Cowboys. This time he did it with his arm, finding John Paul Richardson for a 22-yard touchdown pass. Oklahoma State led 24-7.

Syracuse put together a five-play, opening touchdown drive, finished off by a 12-yard passing score from Garrett Shrader to Oronde Gadsden.

Shrader hooked up with Gadsden on a 17-yard touchdown pass, their second connection of the day, giving the Orange a 17-6 lead.

Braelon Allen finished off an 11-play Wisconsin drive with a 1-yard score. The touchdown gave the Badgers a 7-0 lead.

Mike Hart back on the sidelines

The Big House was rocking ahead of kickoff, and FOX Sports' Rob Stone began the day by delivering some great news.

Former Michigan running back and current running backs coach Mike Hart will be back coaching today after collapsing on the sideline last week at Memorial Stadium.

The pregame activities were in full force as former Wolverine and current Detroit Lion Aidan Hutchinson joined the set to share his thoughts on this year's Michigan team. 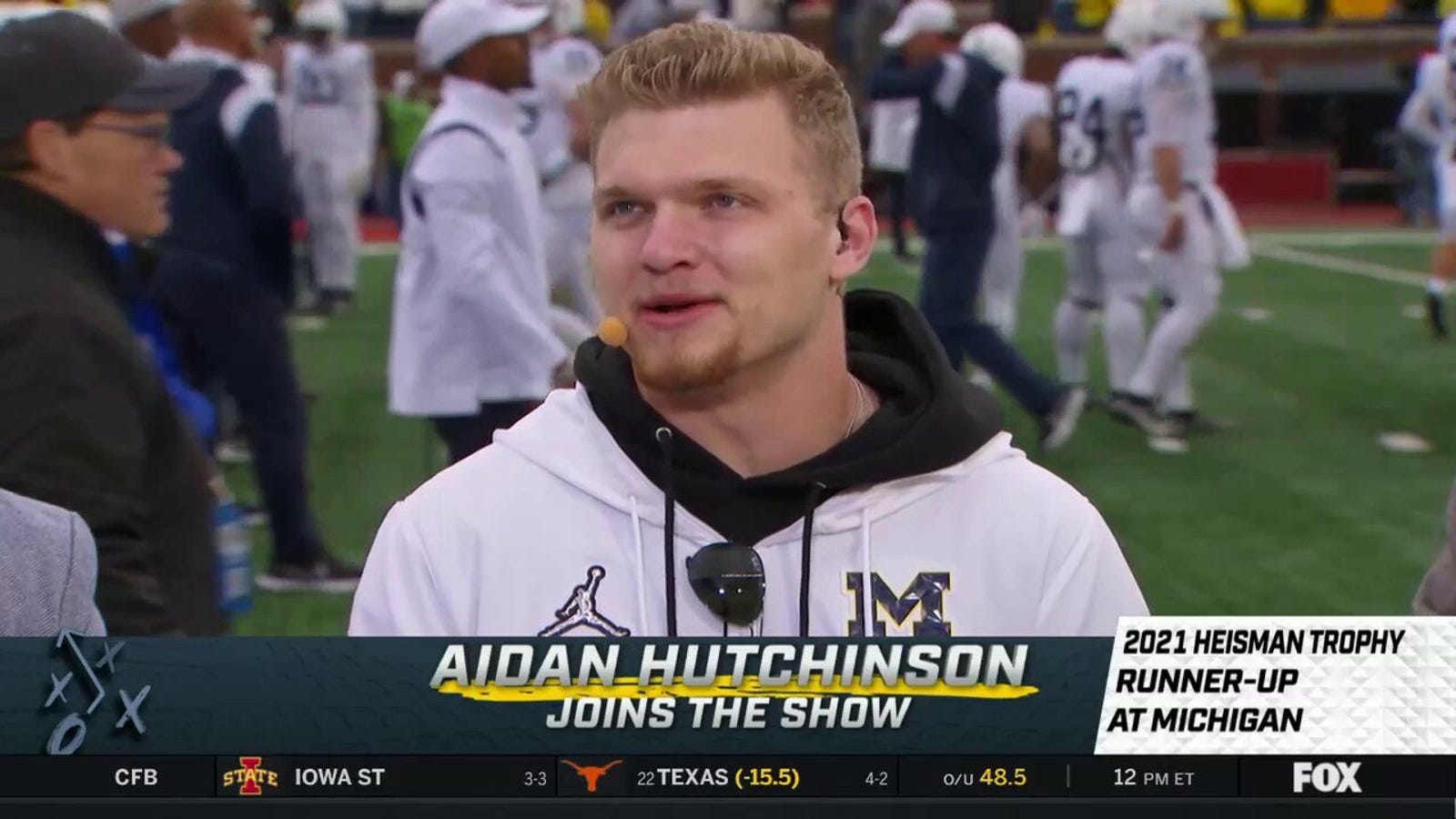 Aidan Hutchinson joined the "Big Noon Kickoff" crew to discuss the Michigan Wolverines' matchup with the Penn State Nittany Lions and his first season with the Detroit Lions.

Michigan scored on each of its first two possessions. Meanwhile, Penn State went three-and-out on its first two drives. Michigan led 6-0 at the end of the first quarter.

Running back Blake Corum finished off a 13-play Michigan drive in the end zone. The Wolverines led 13-0.

Sean Clifford took off for a 62-yard run, getting Penn State to the Michigan 4-yard line. Four plays later, Kaytron Allen scored on a 1-yard touchdown run on fourth-and-goal. The score cut Michigan's lead to 13-7. 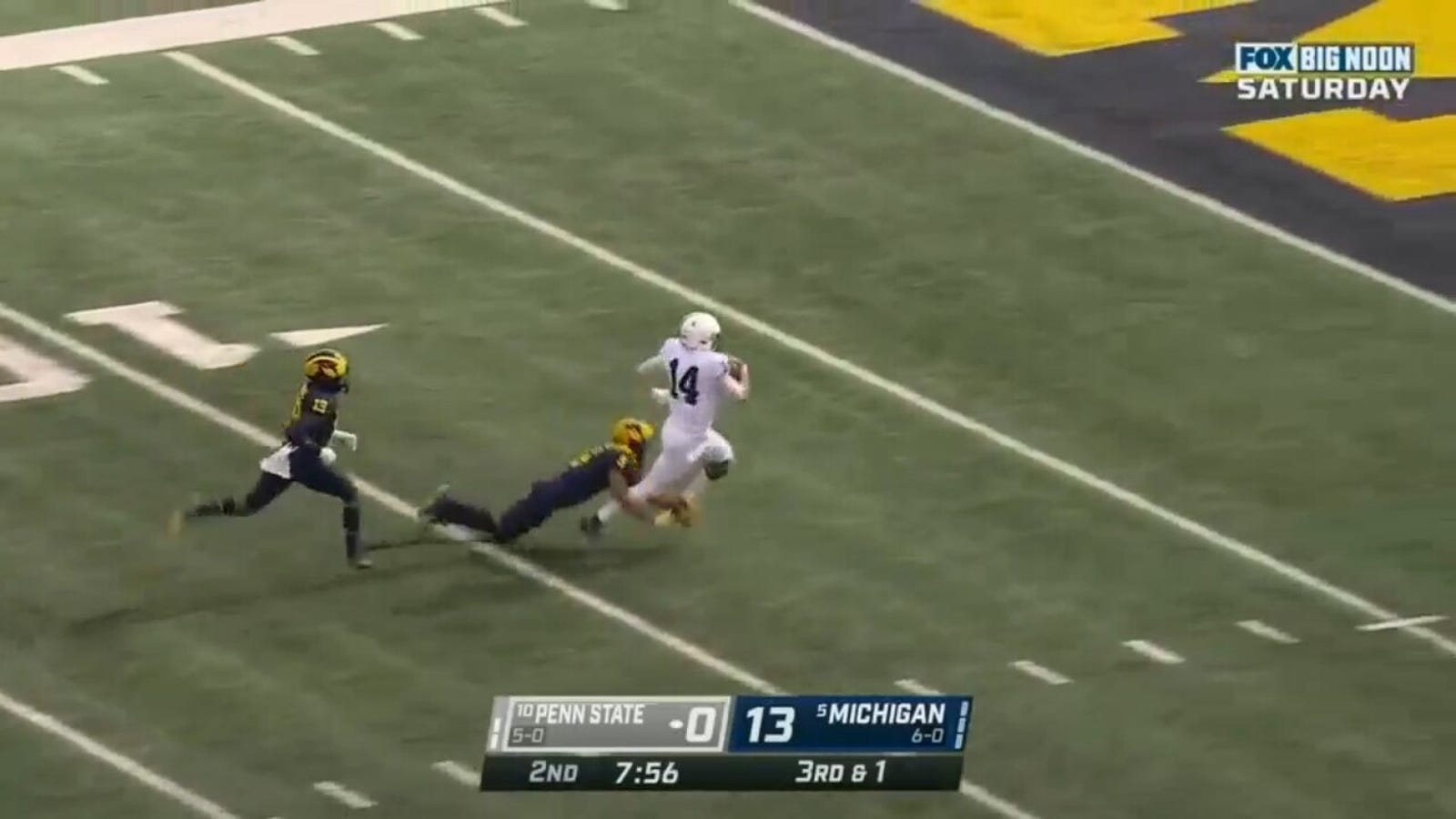 Sean Clifford rips off a 62-yard run before Kaytron Allen finishes the drive to get Penn State on the board vs. Michigan.

We got a game!

Michigan got the ball to midfield and then the drive stalled. Quarterback J.J. McCarthy lost his footing and threw an errant pass that went off two helmets and was intercepted by Casey Jacobs, who ran it back for a 53-yard pick six. The Wolverines made a field goal on their next drive, taking a 16-14 lead into halftime.

Things getting heated at halftime

We had some "halftime shenanigans" going on between the two teams in the tunnel. Players from both teams can be seen shouting back and forth.

Penn State opened the second half with a field goal, set up by a 48-yard strike from Clifford to Harrison Wallace. Michigan answered, as Donovan Edwards evaded the Nittany Lions defense for a 67-yard rushing touchdown.

McCarthy then hit Ronnie Bell to convert the two-point conversion. The Wolverines led 24-17.

Donovan Edwards breaks free for a 67-yard touchdown run to give Michigan a 24-17 lead over Penn State.

Penn State turned it over on downs in Michigan territory, and the Wolverines capitalized on the stop. On the first play of the possession, Corum ran through Penn State's defense for a 61-yard rushing score, giving Michigan a two-touchdown lead. 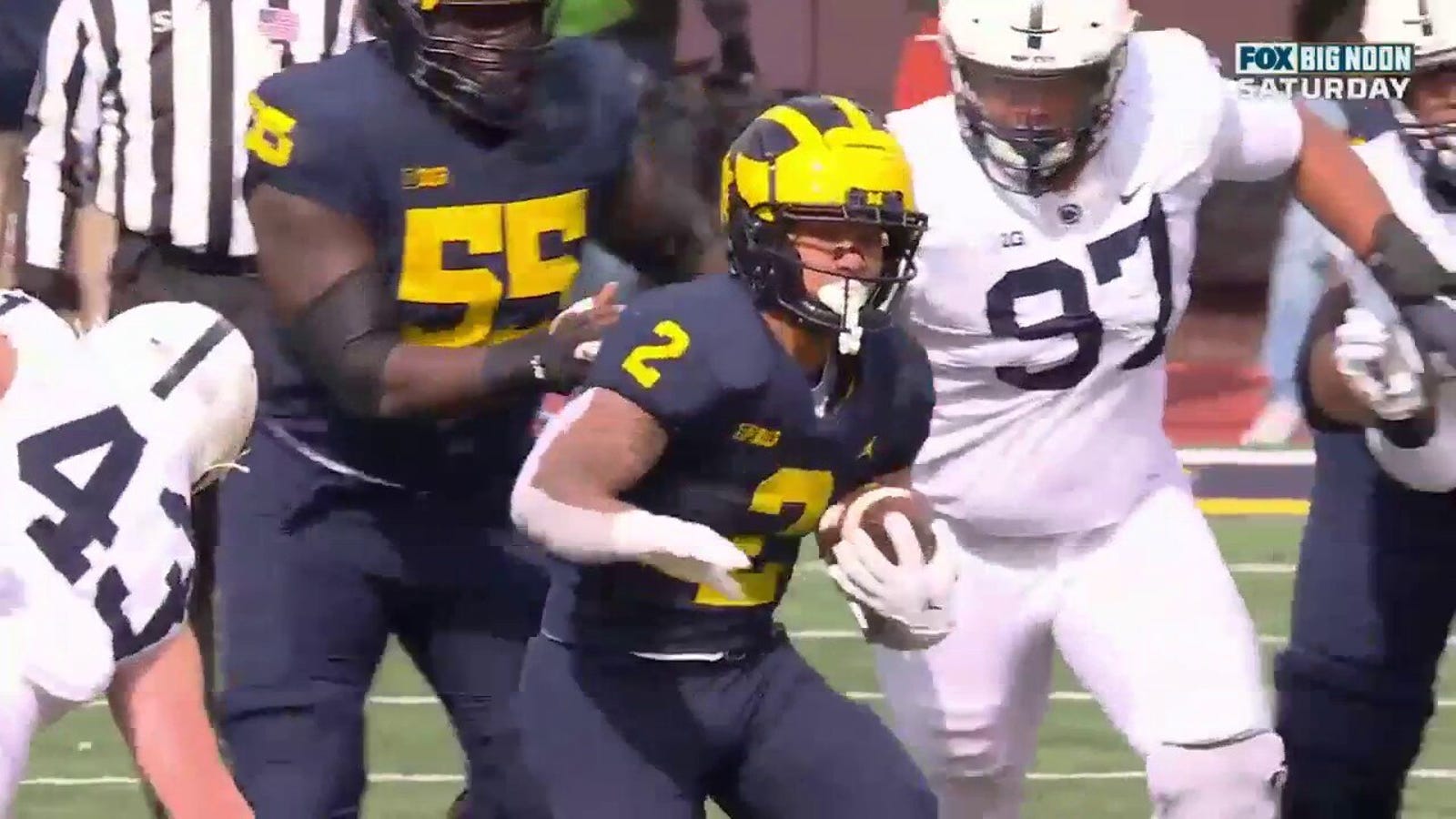 Blake Corum gets his second TD of the day with a 61-yard score to put Michigan ahead by 14 over Penn State.

One more to put it away

Edwards ran in a 3-yard score, his second of the day, to put the Wolverines up 41-17, which would be the final score.

Donovan Edwards scores his second TD of the game, giving the RB duo four total, to extend the UM lead 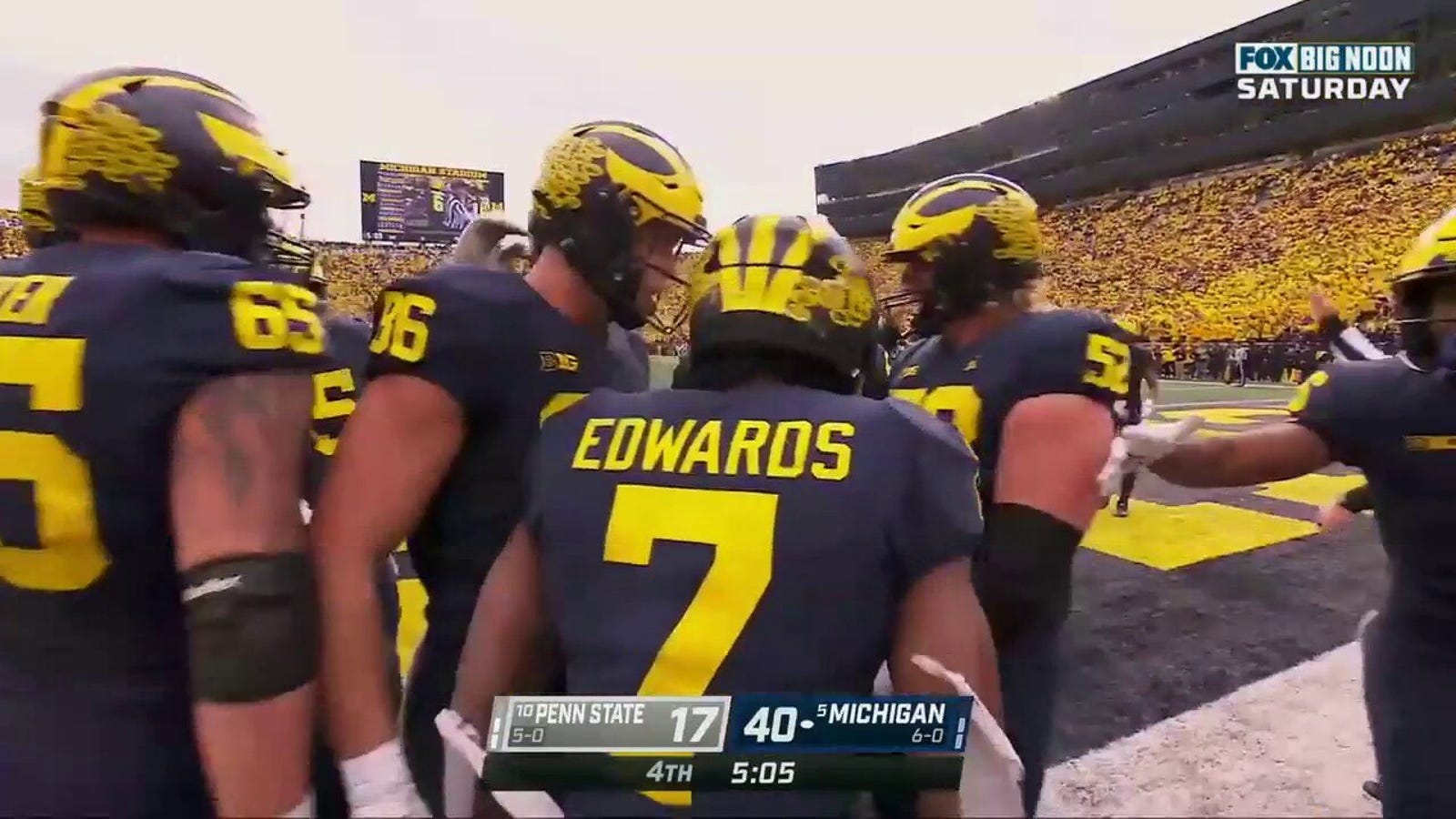 The Jayhawks will be looking NICE when they take the field against the Sooners.

After Oklahoma scored on the opening possession of the game, Kansas did the same on a drive capped off by Jason Bean finding Lawrence Arnold for a dramatic, 39-yard touchdown pass.

Oklahoma got the ball back and methodically took the ball down the field for another touchdown. The ensuing possession, Devin Neal ran in an 11-yard score for Kansas to even the score up at 14.

After fumbling on its previous possession, Oklahoma took the lead back. The highlight of the drive was Dillon Gabriel finding Gavin Freeman for a 41-yard reception. On the next play, Jovantae Barnes ran in his second score of the game. Oklahoma led 21-14.

Gabriel hit Theo Wease for a 24-yard touchdown pass. Then after forcing a three-and-out, Oklahoma put together a three-play touchdown drive, capped off by a 28-yard rushing score from running back Eric Gray. The Sooners took a 35-14 lead.

Oklahoma punches it in

After failing to score at the goal line at the end of the first half, the Sooners punched it into the end zone on their first possession of the second half. Gabriel's 1-yard touchdown run on fourth down, which came after a DaShaun White interception, gave Oklahoma a 42-21 lead.

After Kenny Logan picked off Gabriel, Bean & Co. capitalized. The Kansas quarterback hooked up with Arnold for another score. This one went for 28 yards and cut Oklahoma's lead to 42-28.

After scoring a touchdown following an Oklahoma fumble, the Sooners were able to add a field goal. Then, Bean hit Mason Fairchild for their second touchdown connection of the game, cutting the Oklahoma lead to 52-42 with 3:31 remaining.

The Longhorns set the stone as Keilan Robinson blocked a punt early in the opening quarter.

Texas gets it going

Quarterback Quinn Ewers finished off a nine-play drive with a 15-yard touchdown pass to Xavier Worthy, evening up the score at seven apiece.

The Longhorns put together another nine-play scoring drive the next time they touched the football. The drive ended with a 5-yard touchdown pass to Jordan Whittington. Texas took a 14-7 lead into halftime.

After Texas kicked a field goal to make it a two-score game, Iowa State's offense woke up. On the second play of the drive, Dekkers hit Noel, who took off for a 54-yard touchdown. The score cut Texas' led to 17-14.

Iowa State's defense got off the field, and the offense rewarded their efforts. A 12-play drive for the Cyclones was capped off by Dekkers, who ran in an 11-yard score to give them a 21-17 lead.

We got a good one

Texas answered right back. An 11-play drive ended with Ewers hitting Worthy for their second touchdown hookup of the day, giving the Longhorns a 24-21 lead.

On Iowa State's final possession, Dekkers threw downfield to Xavier Hutchinson, who was unable to reel in a could-be go-ahead touchdown pass. The Cyclones went on to lose the game.

Get more from College Football

Follow your favorites to get information about games, news and more