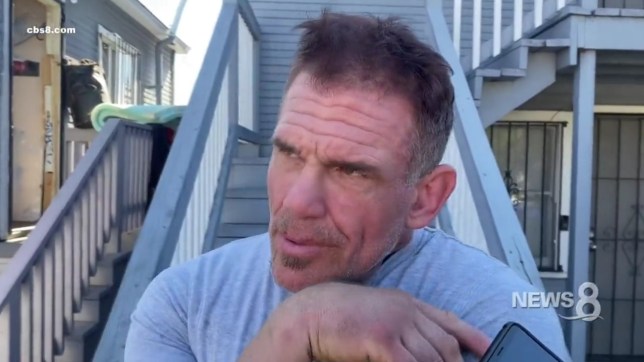 Aaron Brink has gone viral for a shocking interview he gave after his son Anderson Lee Aldrich was accused of killing five people in a LGBTQ night club (Picture: CBS News 8)

The father of the Colorado Springs shooting suspect was previously on multiple US TV shows speaking about his drug addiction and time as an adult film star.

His father, Aaron Brink, has now gone viral for a shock interview with CBS 8 News where he claimed he praised his son for being violent growing up, and appeared far more concerned Aldrich was at a gay bar than that he was accused of murdering five people.

In the interview, he recalled the moment he had been told Aldrich had been arrested, and said: ‘They started telling me about the incident, a shooting… I go on to find out it’s a gay bar. I got scared. “S***, is he gay?”

As clips from the interview began spreading on social media, viewers pointed out that Brink had been on television before – most notably for a 2009 episode of US series Intervention.

The father of the allege shooter spoke about his dislike for gay people and said he had praised his son for violence growing up (Picture: CBS 8)

His wife, Vanessa, talks about running out of options as she tries to deal with his addictions throughout the episode. And several years later the pair ended up on another US show: Divorce Court.

Brink spoke about his addiction and said he was now sober in an episode of Divorce Court (Picture: Divorce Court/ YouTube)

That episode saw Vanessa tell Judge Lynn Toler how his additions had impacted her life, including him taking her credit card to use crystal meth.

During the shocking interview with CBS 8, Brink said he had only recently learned his son was alive, having allegedly been told he had died by suicide in 2016.

Upon learning his son was accused of murdering five people at a gay bar, he responded: ‘But at least he’s not gay.’

He also spoke about his meth addiction, saying he had ‘permanent damage’ from using the drug, and his stint on Intervention came during the worst part of it.

Brink told reporters from CBS 8 News that he is now sober.

Law enforcement said Aldrich opened fire inside Club Q with an AR-15 style assault rifle and was also carrying additional rounds of ammunition and a handgun.

His shooting spree was cut short when a brave bar patron was able to grab his handgun and disarm him, but not before five people were killed and 18 injured.

Frank offers confidential advice about drugs and addiction (email frank@talktofrank.com, message 82111 or call 0300 123 6600) or the NHS has information about getting help.

Adfam has local groups for families affected by drugs and alcohol and DrugFam offers phone and email support to people affected by other people's drug or alcohol misuse.

MORE : Colorado shooter’s dad said his first concern after attack was if son was gay

MORE : Ex-soldier ‘beat Colorado shooter with own gun while drag performer stomped on his head’

You can follow our new Snapchat show Pop Cultur’d, the go-to place for all things pop culture.

Keep up with the latest Showbiz exclusives by following Metro Showbiz on Snapchat.

And football fans can indulge in all the transfer gossip and more on Metro Football on Snapchat.