Alex Pereira vs Israel Adesanya: UFC News–  Despite losing his middleweight crown to Alex Pereira at UFC 281, Israel Adesanya is confident about flipping the tables in a potential rematch. Adesanya recently connected with Ariel Helwani in an exclusive interview and looked back at his performance against Pereira. For UFC News updates with InsideSport.IN

Israel Adesanya accepted the loss fairly, but reflected on the positive sides before calling out the new middleweight champion for a rematch. ‘Izzy’ seemed clear about facing Pereira next, with or without the title.

Israel Adesanya wants to fight Alex Pereira next, regardless of if he's still champion 🏆 #TheMMAHour

For LATEST news on UFC

Israel Adesanya and Alex Pereira have crossed paths three times, twice in Kickboxing and once in the UFC. Pereira has won on all three occasions, with two of them ending in knockouts. That said, not many people bought Israel Adesanya’s claims. Here’s how the fans reacted to Izzy’s recent statement.

Quite literally have not seen that he can beat him.

He had his chance, Pereira is 3-0 with 2 of them are finishes.

“I can beat him” – fighter who is 0-3 against said opponent.

Izzy making excuses that he was waiting Alex to gas out, is just sad. Bro you got beat up. @stylebender— Jere 5uksi 🦝 (@KiitosLonkero) November 14, 2022

I don’t think you can. Use are evenly matched, but he has more heart.. An I’m a huge Izzy fan

Hmmm we’ve seen he can beat him? He’s literally 0-3 against him

Israel Adesanya vs. Alex Pereira at UFC 281 wasn’t a lopsided affair. On the contrary, Adesanya looked dominant throughout the clash. He rocked Alex Pereira with some thunderous shots by the end of round one. Adesanya also scored his first takedown in the promotion and fed Pereira to the ground.

Israel Adesanya was clearly on the brighter side of the fight. However, Alex Pereira had a different game plan. He relied on his high-level striking skills and planted some major blows on Israel Adesanya. 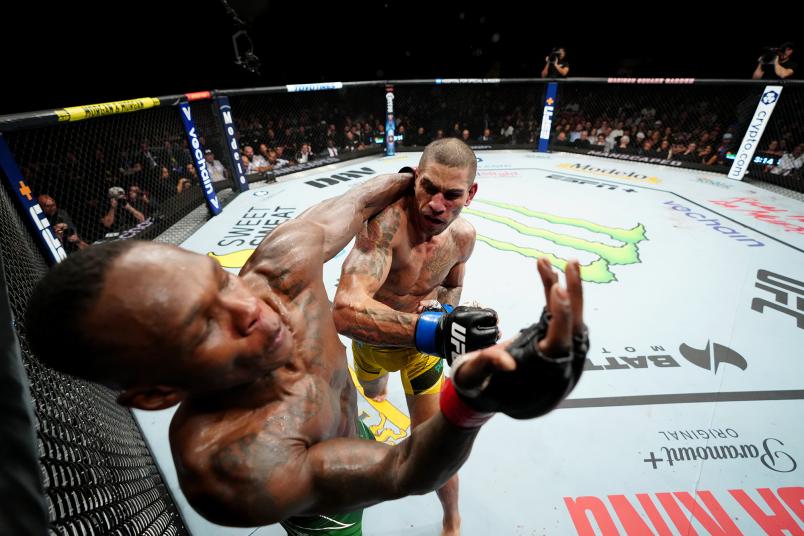 Adesanya was moving brilliantly until he fell prey to a set of combinations landed by ‘Poatan’. In the final round, ‘Izzy’ looked tired. That’s when Alex Pereira unloaded the bigger shots. Although Adesanya was moving his head, he had consumed some major blows by then.

With almost no defense from Adesanya’s side, the fight was stopped mid-round, turning Alex Pereira into the new UFC middleweight champion. There’s no denying that a rematch between the two will be electrifying. Israel Adesanya deserves a shot at his lost middleweight belt and rival Alex Pereira.

For UFC News updates with InsideSport.IN