Brock Lesnar is perceived to be the most dominant superstar in WWE history. While his first run only lasted two years, it was impactful enough to shoot him to megastardom when he eventually became UFC Heavyweight Champion.

It has been ten years since his second WWE stint began, and he has amassed a whopping 10 World Championships in that time. For many fans, the perception of him is still that of a ruthless, unforgiving beast who can destroy anybody in his path.

A few years ago, he even had a reputation for being anti-social when he openly told Stone Cold Steve Austin that he "doesn't like people". However, enough stories have come out from past and present WWE stars, painting an entirely different picture of The Beast Incarnate.

Recently, Corey Graves was one such person who revealed that Brock Lesnar paid out of his pocket in early 2015 when the RAW episode from Hartford, Connecticut got canceled. Here are five more stories to prove that Brock Lesnar isn't a heel in real life - but a true babyface through and through: 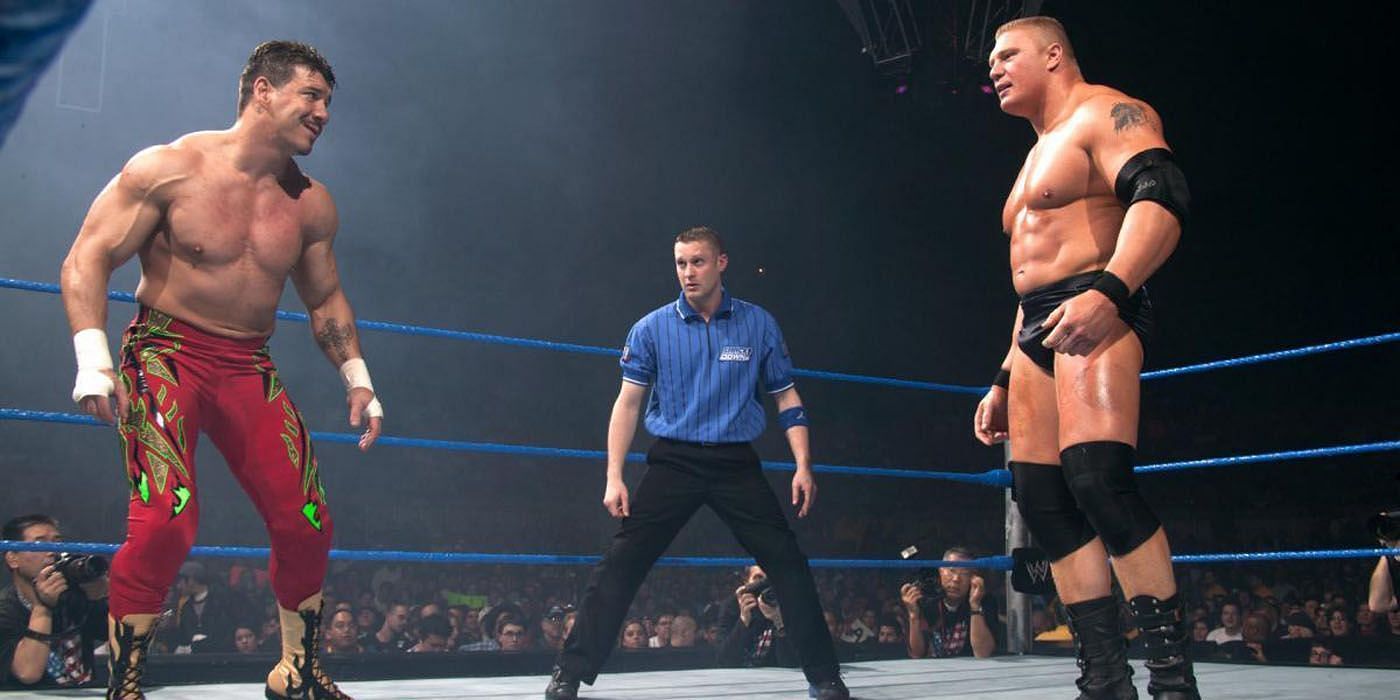 One of Brock Lesnar's most iconic moments in WWE was when he suffered a defeat and lost the WWE Championship to the late great Eddie Guerrero. Vickie Guerrero revealed that Brock Lesnar had a great relationship with her late husband in real-life and that whenever they meet, he hugs her and tells her how much he misses the former Champion:

"I talk to Brock [Lesnar], he loved Eddie," said Vickie. "[Brock] will just hug me and say, 'I still miss Eddie every day,' and that's something really special when I see Brock every now and then."

Brock Lesnar was in a position where he could have easily politicked to beat the physically smaller Guerrero, but he ensured that he gave him his moment to shine before eventually departing WWE himself a couple of months later. It's important to note that this was a period when Lesnar was in a bad place physically and mentally - where he was dependent upon alcohol and painkillers upon his own admission. It says a lot about his character.

#4. Brock Lesnar took WWE legends on his private jet to Saudi Arabia in 2019 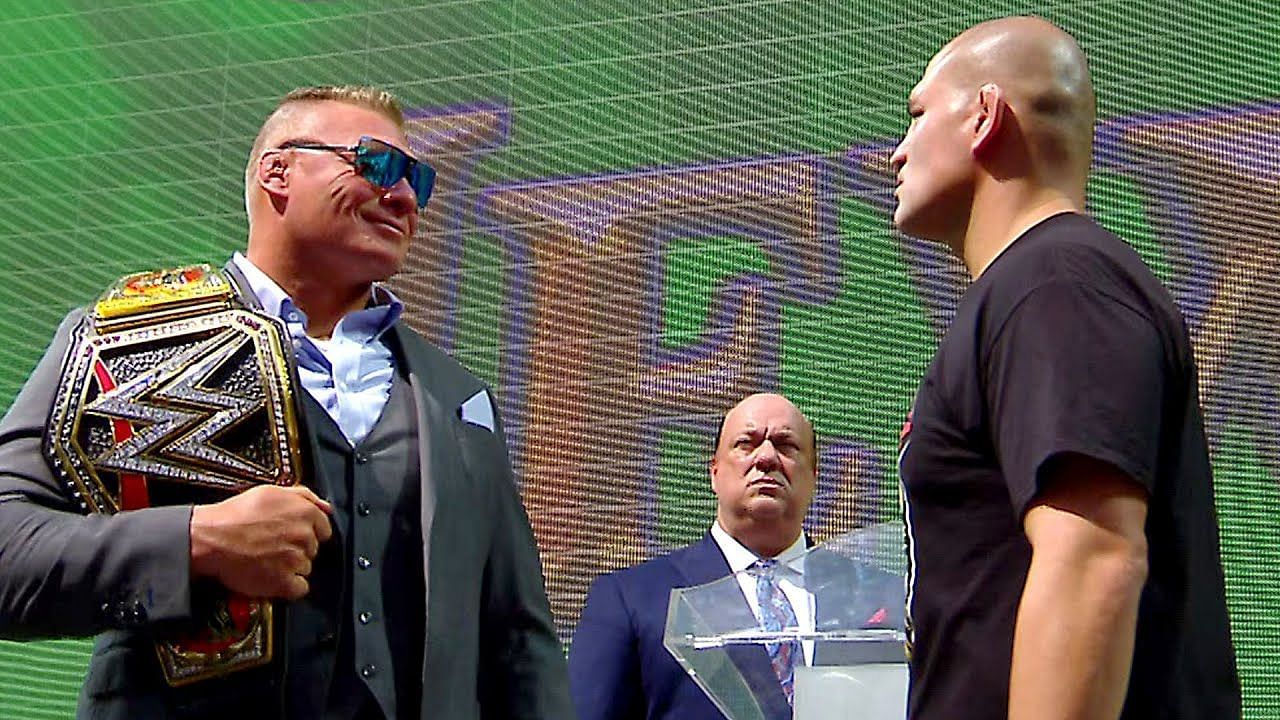 Hulk Hogan made his first return to WWE in years after being banished for his past controversies. Hogan faced an issue when his plane landed in Iceland as a tire reportedly burst. However, the Hall of Famer hinted on Facebook that Brock Lesnar let him climb on his private jet without stating his name. PWInsider reported that Ric Flair and Jimmy Hart were also among the legends who Lesnar helped:

"Over there is a buddy of ours and he's got the same type of plane we were on, and he's going to be graceful enough to let us climb on board to continue the journey. Former Minnesota boy... we're going to make it."

This was a case of Lesnar going out of his way to help fellow legends when he was not required to do so.

The 3MB days seem to be a long way in the past for Drew McIntyre. Before his incredible WWE return stint, the Scottish star was a part of a comedy trio known as 3MB - alongside Jinder Mahal and Heath Slater.

It was a big drop from when he was dubbed "The Chosen One" by Vince McMahon. In late 2020, months after McIntyre dethroned Brock Lesnar in the main event of WrestleMania 36, he revealed that Lesnar approached him once during his 3MB stint and saw his potential, asking him why he was involved in the comedy faction:

"I remember it well. Brock was not long back at that point from UFC. He pulled me aside, and he straight-up asked me, ‘Why are you involved in this?’ He was so confused, but he saw something in me and believed in me. It’s pretty crazy, all these years later, I was the guy to take the title from him at WrestleMania."

It certainly is crazy to see how it all came full circle with the two headlining WrestleMania in 2020.

And if your down with that & agree this is funniest promo of the year, Give me a hell yeah!!!

So after watching @RonKillings on #WWERaw last night, It made me remember this amazing promo with @BrockLesnar in January this year, which I feel is the funniest promo of 2020And if your down with that & agree this is funniest promo of the year, Give me a hell yeah!!!

So after watching @RonKillings on #WWERaw last night, It made me remember this amazing promo with @BrockLesnar in January this year, which I feel is the funniest promo of 2020And if your down with that & agree this is funniest promo of the year, Give me a hell yeah!!! https://t.co/v8Uhz6JG2u

In early 2020, Brock Lesnar was entering the Royal Rumble as the WWE Champion with practically no challengers left for him. Ahead of that, he would have a memorable comedy segment with legend R-Truth on RAW.

R-Truth has been one of the most beloved WWE stars in the last few years and his ability to constantly entertain wasn't just exclusive to fans. R-Truth told TalkSport in an interview that Paul Heyman had a bet that he couldn't make Lesnar laugh and break character. He proceeded to reveal the hilarious and wholesome aftermath:

"I remember the moment we’re in the ring and I’m going on and on, making stuff up in my head and going on and on, and I saw when Brock looked at me with that look of ‘what the hell is he talking about?’ because I’m just babbling. I knew right then I had him. I did all I could to hold myself from laughing when I saw Brock bust out laughing because of Paul Heyman’s facial expression. The magic just went on man, it kept going on. And after that segment was over, we’re in the back and Brock was still laughing. He said ‘Bro, we got to do something together. There’s something there. I don’t know what it is, but there’s something there.’"

It just goes to show that everybody loves R-Truth!

#1. CM Punk reveals how The Beast Incarnate is in real life 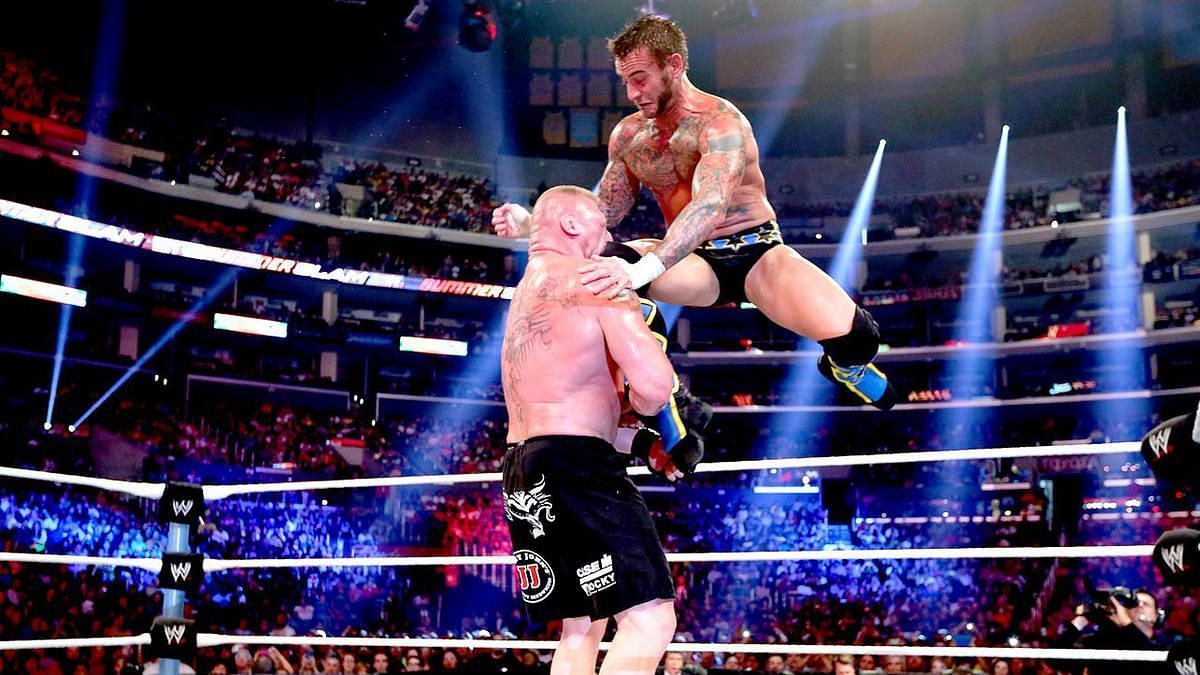 However, AEW backstage drama aside, CM Punk and Brock Lesnar had one classic match against each other at SummerSlam 2013. The Beast Incarnate would come out on top, and it was a little less than half a year before Punk's abrupt departure from WWE and wrestling.

CM Punk stated in an interview that Lesnar is a "sweetheart" and revealed how he went out of his way to offer help ahead of the former's UFC and MMA debut:

"I don't want to ruin his image. I think he's a f---in' sweetheart. This is a guy, when I got into MMA and I left wrestling, he was texting me, 'Hey, if you need any help.' I'm always kind of a standoffish guy. It's hard to open up and trust people in the pro wrestling world. But he was never anything but a real sweetheart. It was a pleasure to work with him. He's just a great guy, I think."

From the look of things, the "cold" impression that fans had of Brock Lesnar was due to his relatively anti-social nature. It's not uncommon for human beings to want to be around lesser people and it doesn't make Lesnar a cold-hearted person. If anything, the impression of his real-life personality has almost always been a positive one.

Tag: Stone Cold Steve Austin, Heavyweight Champion.
Related News
“He’s Famous for Being a Bad Guy, But..”: Brock Lesnar’s Childhood Guardian Once Disclosed a Bittersweet Truth About the Beast Incarnate
EC3 discloses what he spoke to Brock Lesnar about for 10 minutes in their only interaction (Exclusive)
Which WWE Superstar can beat up Brock Lesnar in real life?
5 Times Brock Lesnar proved he wasn't a heel in real life
Brock Lesnar’s Close Friend Once Revealed How His Wife And Children Turned His Life Around
Was There Real-Life Heat Between the Undertaker and Brock Lesnar?
In Brutally Honest Confession, Brock Lesnar Once Admitted That UFC Fans Wanted to Ship Him Back to ‘Vince McMahon’s Doorstep’
“That Was The Day..”: When Dana White Gave Brock Lesnar His Approval Amidst Uncertain UFC Future
“Waste of Flesh”: Despite Having Drinks with ‘A**hole’ Brock Lesnar, UFC Legend Ripped the Beast Incarnate in 2013
“She Should Have Learned..”: Brock Lesnar Once Explained How Ronda Rousey’s Shocking Loss Against Holly Holm Will Help Her in Life
Brock Lesnar Once Revealed Why His UFC Move Was a Win-Win Situation For All Including WWE- “There Was No Downside…”
John Cena or Brock Lesnar: Who is stronger in real-life?
Latest News
78% of marketers saw a lift in marketing efficiencies as per MMA EY report
UFC star Paddy Pimblett claims footage proves Jake Paul fights are "fixed"
LE SSERAFIM Huh Yunjin Becomes Hot Topic For Striking Beauty in THESE Photos
How many WWE Superstars has Ronda Rousey lost against?
Adesanya hoping to headline UFC Africa in 2023: ‘Game ain’t over’
Morning Report: Javier Mendez believes Islam Makhachev ‘needs to clear everyone out’ to earn P4P ranking
The Case for Bonus Slots Not Blocked by Gamstop
Jiri Prochazka explains why he’s still “grateful” despite vacating title and withdrawing from UFC 282
Dan Rafael: Why did Conor McGregor call him 'The Boxing Guy'?
Stephen Thompson vs Kevin Holland UFC Odds, Time, and Prediction
Cboe Europe Derivatives Welcomes New Participants
Sherdog’s WMMA Pound-for-Pound Top 10
Galaxis Launches Highly Accessible NFT Creation Platform
UFC Fight Night Thompson vs Holland: Where to watch Stephen Thompson vs Kevin Holland live? UFC News, UFC Fight Night 216, UFC updates
3 Fighters Who Stand To Gain the Most at ONE on Prime Video 5