We’re now into November and that means that in just a couple of weeks, Israel Adesanya will defend his UFC middleweight title against the only man to ever knock him out, kickboxer extraordinaire Alex Pereira.

Alex Pereira has made a red-hot start to his UFC career, winning three bouts in a row, but does he really have what it takes to defeat middleweight kingpin Israel Adesanya?

Despite ‘Poatan’ only having three bouts in the octagon, the fact is that he might turn out to be the right man to unseat ‘The Last Stylebender’, after so many others have tried and failed. However, there’s an equal chance that Adesanya will win, too.

With this in mind, here are three reasons why Alex Pereira will beat Israel Adesanya at UFC 281 – and two reasons why he won’t.

#3. Alex Pereira is a better striker than Israel Adesanya and Adesanya doesn’t have the ability to mix things up 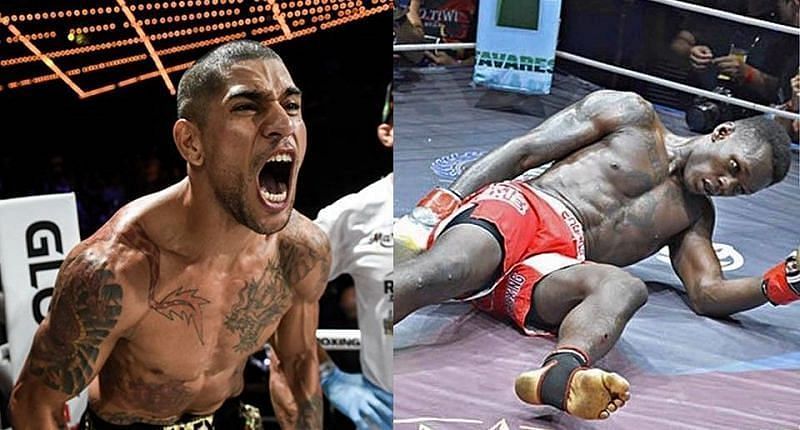 Given that he stands as one of the most accomplished kickboxers in UFC history, with a record of 33-7 in the ring, it’s definitely arguable that Alex Pereira is amongst the best strikers competing in the octagon today.

More to the point, though, it’s also arguable that ‘Poatan’ is the one man competing in the UFC right now who can argue that he’s a better striker than reigning middleweight champion Israel Adesanya. He holds two wins over ‘The Last Stylebender’ from their time in the GLORY promotion, including one victory via knockout.

Alex Pereira knocked out the middleweight champ in the Stylebender's last kickboxing match.

The only man to stop Israel Adesanya is now in the UFC.Alex Pereira knocked out the middleweight champ in the Stylebender's last kickboxing match.Poatan makes his MMA debut at UFC 268

The only man to stop Israel Adesanya is now in the UFC.Alex Pereira knocked out the middleweight champ in the Stylebender's last kickboxing match.Poatan makes his MMA debut at UFC 268 🔥 https://t.co/4qLis4dndm

Of course, it’s fair to say that MMA is not straight kickboxing. We’ve seen plenty of high-level kickboxers cross over before and fail to make a mark. Semmy Schilt, for instance, is amongst the greatest heavyweight kickboxers of all time and he barely made a dent in the UFC.

However, while Pereira might prove to be a limited fighter in MMA’s other realms, particularly on the ground, it’s unlikely that Adesanya is going to be the man to test him there.

It’s almost impossible to remember ‘The Last Stylebender’ ever shooting for a takedown in his octagon career, nor does he really favor a clinch war against the fence.

Put simply, if the fans are hoping that Adesanya will mix things up against ‘Poatan’, it’s likely that they’re mistaken. This fight is much more likely to be a striking battle, and if that’s the case, then Pereira is likely to win.

#2. Alex Pereira has one-shot kill power in his left hand 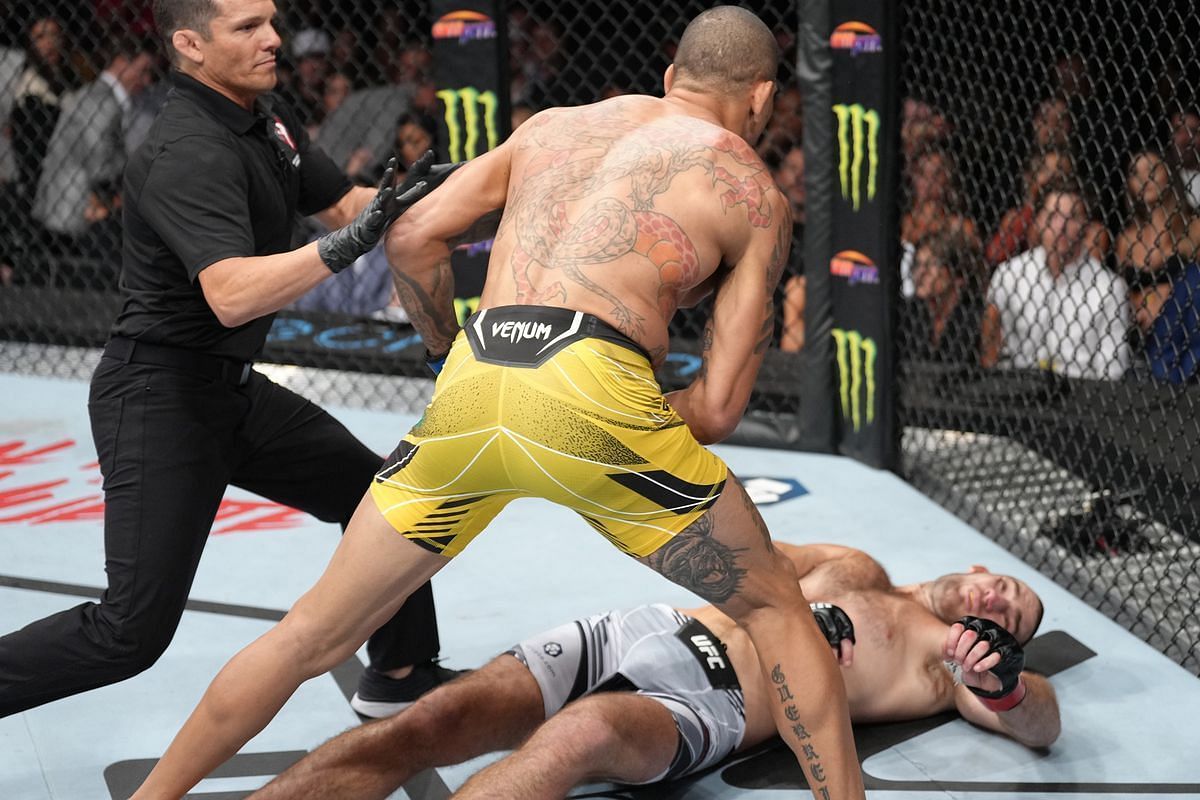 Alex Pereira has scary knockout power in his left hand

Part of the reason that the UFC is so exciting to watch and so popular with fans is the fact that a fight in the octagon can literally end at any time, from the opening seconds of a bout to the very last moment. All it takes is one clean shot on the button, and anyone can be knocked out.

Of course, when it comes to being able to take an opponent out at any time, one-shot knockout power helps massively, and not every fighter possesses it.

However, it’s fair to say that Alex Pereira definitely does. His coffin-nail left hand is one of the most deadly weapons ever seen inside the octagon. We saw evidence of that in his last bout, as he needed just one punch to take out a very tough contender in the form of Sean Strickland.

What does this mean for his middleweight title bout with Israel Adesanya? Well, put simply, if he wants to win, ‘The Last Stylebender’ essentially can’t make a single mistake. If he puts one foot wrong and Pereira lands that left hand, then the fight is probably going to be over and done with.

Based on Adesanya’s most recent fights, particularly against skilled strikers, it’s unlikely that the Nigerian-New Zealander is going to be able to take ‘Poatan’ out in a blitz. So given the fight is scheduled over five rounds, Pereira is definitely likely to have at least one opening to land that killer left hand.

If he does that, then he’ll probably knock Adesanya out again, this time claiming UFC gold in the process.

#1. Alex Pereira’s previous wins over Israel Adesanya might give him a psychological edge 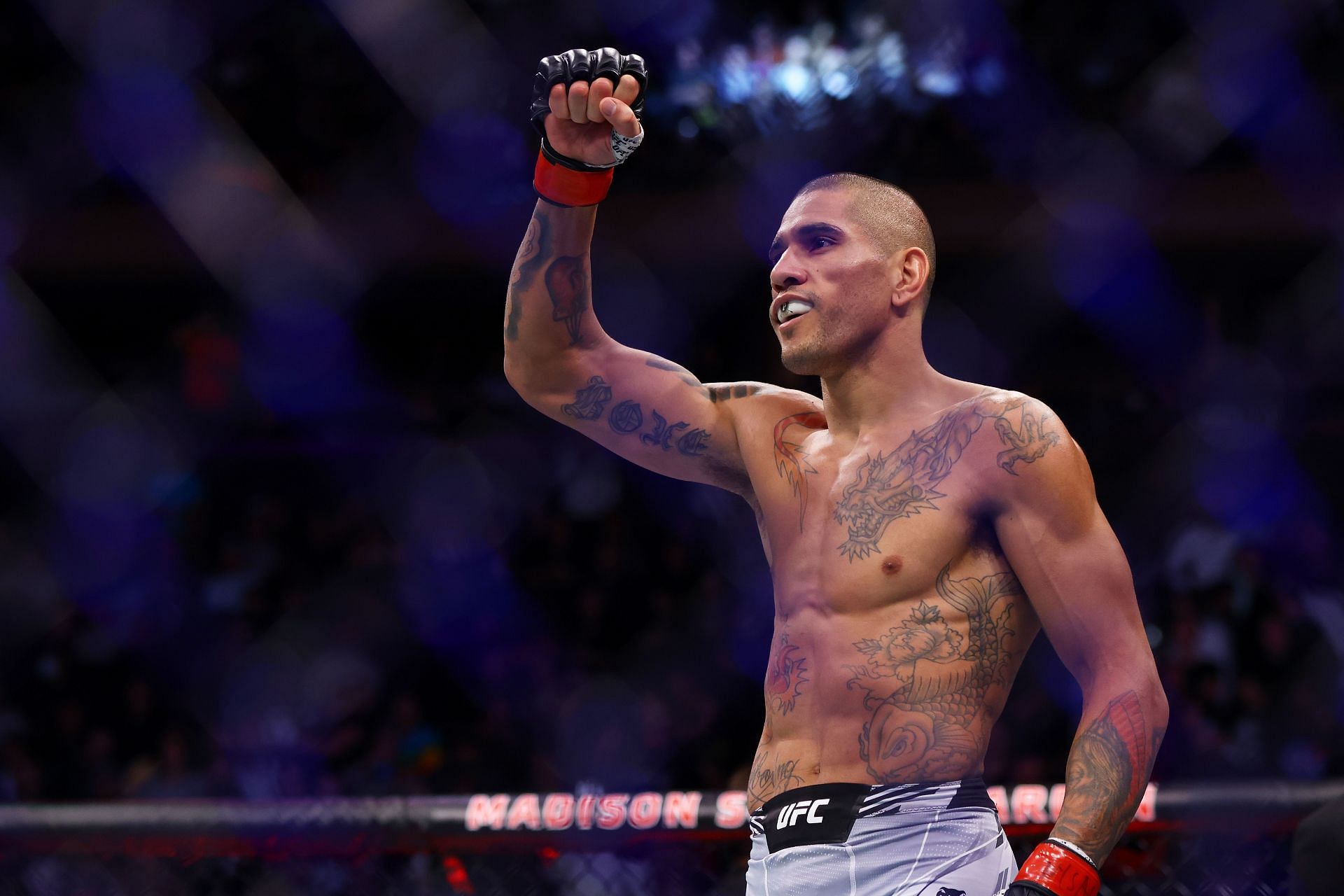 Ever since his UFC debut against Rob Wilkinson back in February 2018, Israel Adesanya has shown immense confidence every time he’s stepped into the octagon.

‘The Last Stylebender’ was quick to call out the middleweight division’s best fighters after defeating Wilkinson. It didn’t take him long to prove that he belonged at the top.

He easily cut through the likes of Derek Brunson and Anderson Silva, and eventually claimed gold by knocking out Robert Whittaker less than two years after his first fight in the promotion.

Given that his only loss in the octagon came at 205lbs to then-light heavyweight champ Jan Blachowicz, Adesanya’s aura of invincibility is understandable. However, will he have the same confidence against Alex Pereira?

It’s highly questionable. Sure, ‘Poatan’ doesn’t have nearly the same level of experience as Adesanya does. However, ‘The Last Stylebender’ has tasted defeat against the Brazilian twice, losing to him via knockout just over a year before he moved to the UFC.

In fact, that loss, which came via knockout, was Adesanya’s last in the kickboxing ring altogether.

Sure, Pereira’s wins over ‘The Last Stylebender’ didn’t come easily by any means, but there’s definitely an argument that he might have the psychological edge coming into their third bout at UFC 281.

And in a sport of fine margins like high-level MMA, a psychological advantage could well be all it takes for ‘Poatan’ to win.

While there are definitely reasons why Alex Pereira will beat Israel Adesanya at UFC 281, the fight could easily go the other way, perhaps for one of the following reasons.

#2. Alex Pereira is too inexperienced in MMA to beat Israel Adesanya 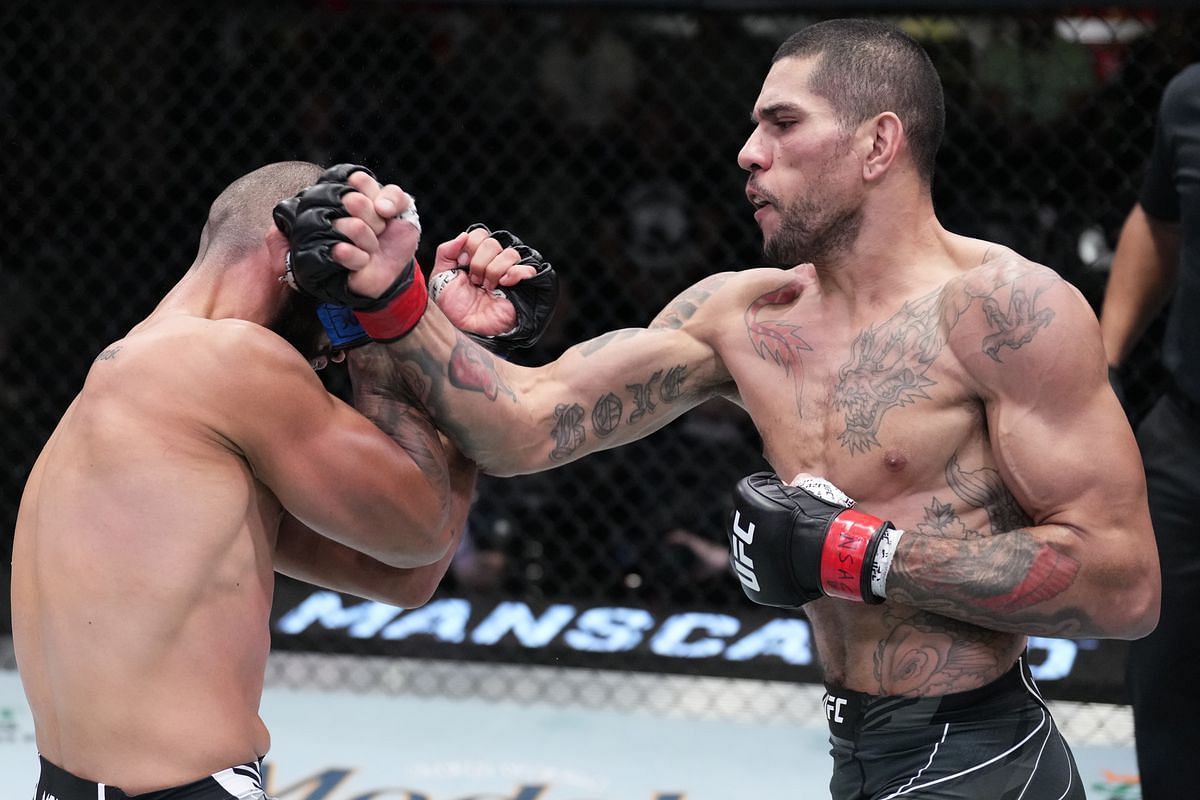 While his path to a UFC title shot hasn’t been the quickest in the history of the promotion – Gilbert Melendez, for instance fought for gold in his octagon debut – it’s safe to say that Alex Pereira is one of the more inexperienced fighters to challenge at this level.

‘Poatan’ has just three wins in the octagon, with only one of them – over Sean Strickland – coming against a ranked opponent. Prior to his UFC debut, meanwhile, he only had four professional MMA bouts, with one of them ending in a submission loss.

Essentially, the reason for Pereira’s meteoric rise is almost entirely down to his extensive and legendary kickboxing career – a career that saw him claim titles in two different weight classes in the world-renowned GLORY promotion.

Israel Adesanya, meanwhile, debuted in the octagon with eleven professional MMA wins to his name, and since then, he’s fought on 13 occasions in the world’s biggest promotion, losing just once.

Sure, Adesanya isn’t renowned for anything more than his slick striking, but it’s fair to say that he’s probably far more comfortable in the octagon than Pereira will be by the time they face off at UFC 281.

So while ‘The Last Stylebender’ is unlikely to unleash a wrestling-based attack on the Brazilian, his knowledge of being able to control the distance and pace of a fight inside the octagon could be a huge advantage for him.

Will a fighter as inexperienced in MMA as Pereira really be able to get a handle of such a high-level veteran, particularly when it comes to closing the distance to land that deadly left hook? It’s a genuine question mark, and for that reason, Adesanya ought to be considered the favourite.

#1. Israel Adesanya will be more determined than ever before to avenge his previous losses 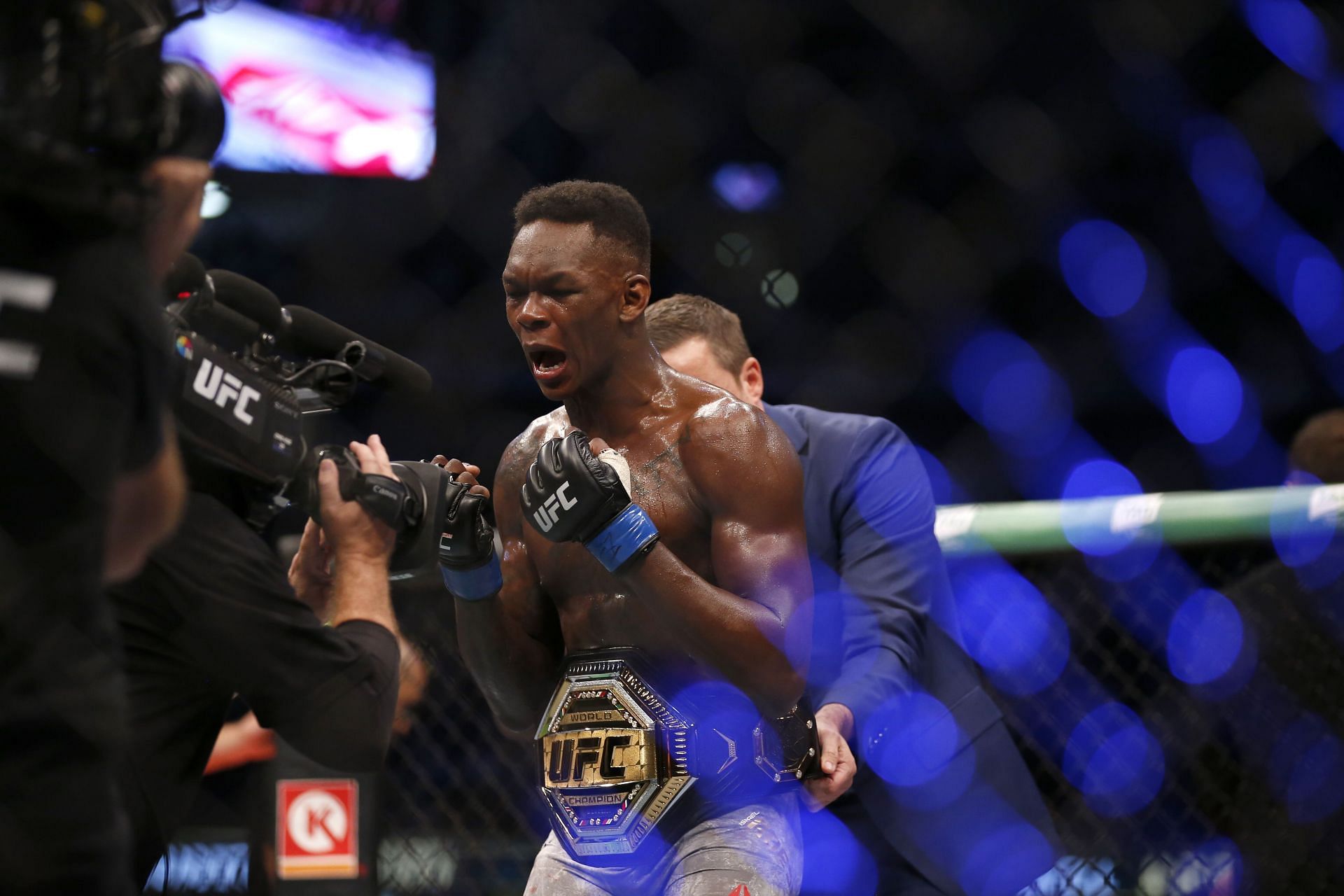 Outside of an ill-fated attempt to claim gold in the octagon at 205lbs, something that never really suited his lean and lanky frame, Israel Adesanya has always produced his best performances in the UFC when the pressure has been on him.

Many fans thought he was too inexperienced to deal with Derek Brunson, for instance – and yet ‘The Last Stylebender’ took him out with a sniper’s precision in the first round.

In his title unification bout with Robert Whittaker, meanwhile, Adesanya hogged the spotlight with a flashy entrance – meaning he’d have looked foolish if he’d have lost – but he again produced the goods, taking out his toughest-ever opponent via TKO.

@Stylebender finishes Whittaker in the 2nd round! Wow!

On the other side of the coin, though, when fans have expected ‘The Last Stylebender’ to win easily – as they did in his recent title defenses against Marvin Vettori and Jared Cannonier – Adesanya has looked almost disinterested, doing just enough to win without truly shining.

Basically, it seems like Adesanya delivers his best performances when his motivation is at its highest, and given that he’ll be looking to avenge a pair of kickboxing losses to Alex Pereira, it’s safe to say that he’ll have plenty of motivation at UFC 281.

In fact, given that ‘Poatan’ stands as the only man to ever knock him out, it’s likely that ‘The Last Stylebender’ will be more driven and determined than he’s ever been before. And if that’s the case, it could be bad news for Pereira.