PHILADELPHIA — If Game 3 was therapy, Game 4 was ecstasy.

A day after Phillies first baseman Rhys Hoskins quashed a decade’s worth of demons with his earth-rattling bat spike, the 87-win Philadelphia Phillies actually won the damn series, outlasting the 101-win, defending-champion Atlanta Braves to advance to the club’s first NLCS since Bryce Harper was 17 years old.

As Seranthony Dominguez struck out the side in the ninth to seal the win, Citizens Bank Park went full Vesuvius, erupting into sheer sports bliss. Strangers hugged strangers, suddenly friends, united by the irrationality of baseball fandom. 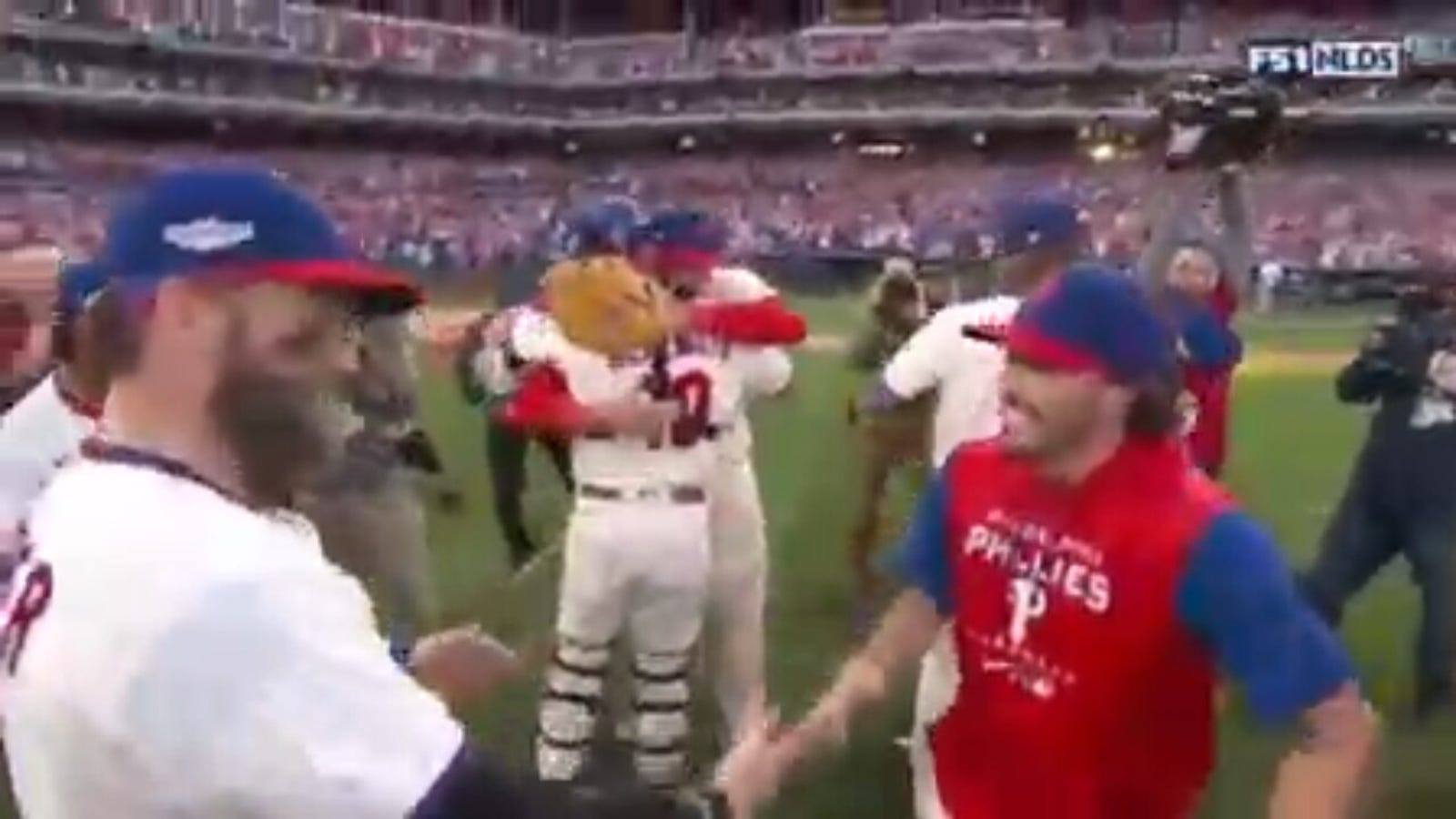 The Philadelphia Phillies beat the Atlanta Braves 8-3 on Saturday in Game 4 to win the NLDS and seal their place in the NLCS.

The Philadelphia Phillies — the final team to clinch a playoff spot, the team that snuck into October thanks to the league’s expanded wild-card format, the team that finished 14 games worse than the Braves — get to play more baseball. Their ear-splitting home crowd gets at least two more opportunities to go wild. Against all odds, the magic, roller-coaster ride of the 2022 Phillies flies on.

Unlike with Friday afternoon’s now-iconic Hoskins highlight, there was no singular defining play in the Phillies’ 8-3 victory in Game 4. Instead, it was a gradual climb of sporting joy to the final out.

Brandon Marsh's three-run blast in the second gave Philly a 3-0 lead and eased any early-morning jitters. JT Realmuto's fourth-inning, inside-the-park homer (the first ever by a catcher in the postseason) was the perfect bizarro, only-in-Philly play that people will be talking about for a while.

J.T. Realmuto hits an inside-the-park home run to give Phillies a 4-1 lead 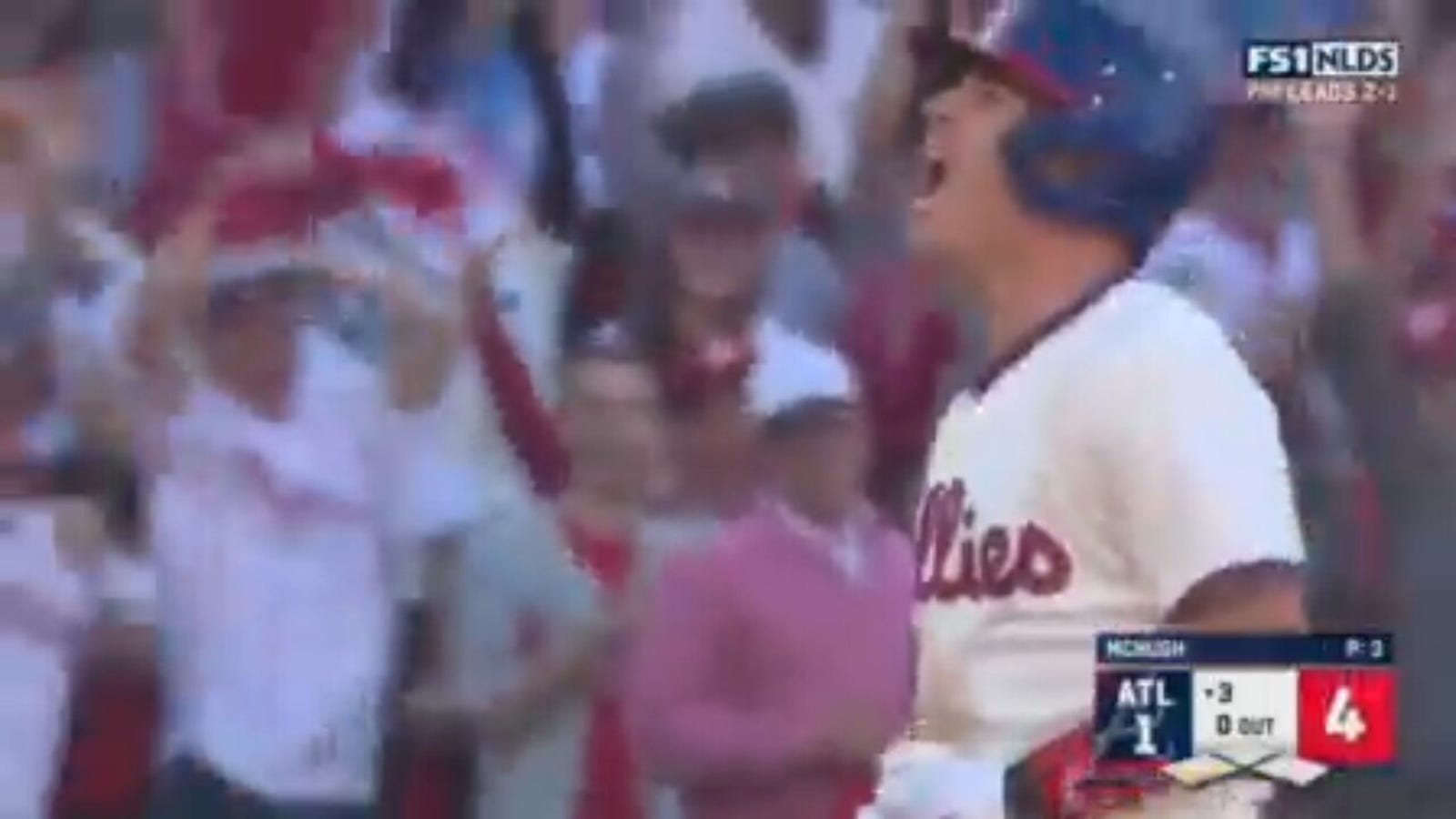 J.T. Realmuto laces one off the wall and runs around the bases for an inside-the-park home run that puts the Phillies on top 4-1.

The team’s seventh-inning barrage of unspectacular singles, which plated three to stretch the lead to five, was when the home crowd really started to feel confident. The Philadelphia Phillies add three more runs in the sixth inning to extend their lead on the Braves to 7-2.

And when Harper launched an opposite-field laser beam, his third home run of the postseason, to make the score 8-3, everyone in the building knew what was next: a final out, a champagne party and a trip to California to take on either San Diego or Los Angeles. Bryce Harper's solo home run in the eighth all but sealed the Philadelphia Phillies' 8-3 win over the Atlanta Braves to move on to the NLCS.

In the end, Philly’s resounding Game 4 win was made possible by the most unlikely of local heroes: the bullpen.

Since 2019, when this franchise pried its competitive window open by making a hefty donation to the "Bryce Harper Plays Baseball" fund, the Phillies have struggled to assemble anything resembling a competent bullpen. In that span, Philly ranks fifth-to-last in MLB in reliever ERA. The only teams worse — Colorado, Baltimore, Washington and Pittsburgh — have combined for a .413 winning percentage in that time, with D.C.’s miracle ‘19 title run the only postseason appearance among them.

The past few years in Philadelphia, there were implosions of otherworldly proportions, pitching disasters you usually experience only in your nightmares. Only a month and a half ago, the Phillies ‘pen blew a seven-run lead to the Arizona Diamondbacks.

But on Saturday, they kept the Braves at arm’s length and secured the emphatic win.

A bullpen cobbled together and made up of rejects, has-beens, no-names and reclamation projects held firm when it mattered most.

Bryce Harper talks with FOX's Ken Rosenthal after the Philadelphia Phillies beat the Atlanta Braves in Game 4 to advance to the NLCS.

In the early days of this baseball calendar, when the $242 million Phillies were stinking up a storm under Joe Girardi, first baseman and longest-tenured hitter Rhys Hoskins went to a member of the club’s analytics team looking for help. The 29-year-old, who’s been with the organization since 2014, wanted some insight into why the team was struggling so mightily.

Despite their substandard record, the Phillies’ offense was top-10 in a bunch of "under the hood" categories. They were hitting the ball really hard and putting solid at-bats together, and as a team, they ranked sixth league-wide in slugging percentage.

Sure, they could use a few more walks and a few fewer strikeouts, but who couldn’t? Generally, the Phillies’ offense was doing fine. But things simply weren’t going their way.

The message for Hoskins? Stay the course. Don’t mess with anything. Change, he was told, was "just an hour away."

That offhand comment, those four simple words stuck with Hoskins and became his mantra. One of the streakiest hitters in the league, Hoskins has experienced his fair share of cold stretches at the plate. But this season, during those roughest patches, he reminded himself that success was "just an hour away."

Still, even as the Phillies surged their way back into contention, nobody could have envisioned the euphoric scenes of Saturday afternoon. That's because all season, Philadelphia’s division rivals in Atlanta looked much more than an hour away. 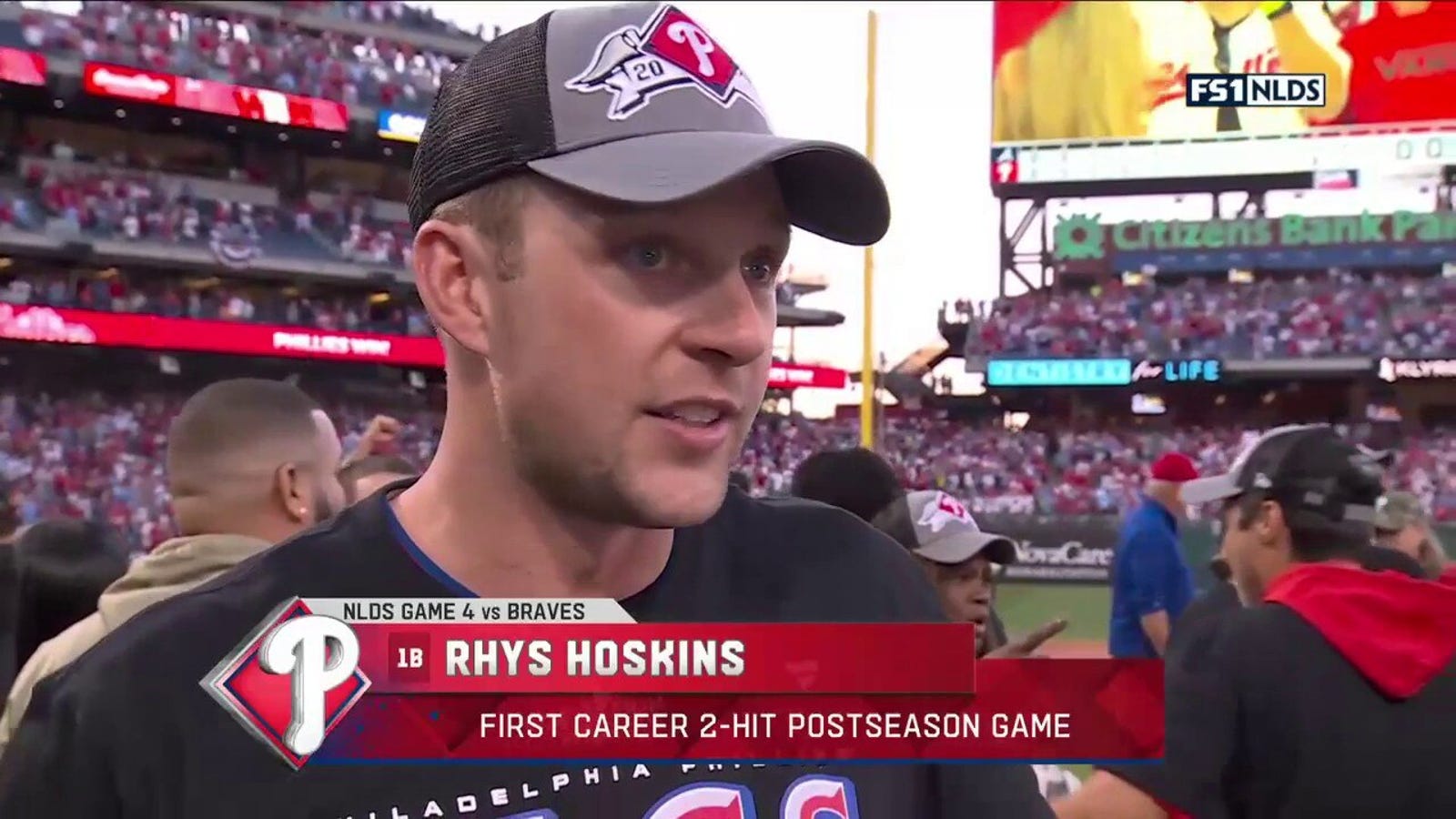 Rhys Hoskins spoke with Ken Rosenthal after the Philadelphia Phillies advanced to the NLCS with a victory in Game 4.

Behind a scorching 78-34 (.690 winning percentage) record since June 1, Atlanta chased down the Mets to capture their fifth consecutive division crown. Heading into October, they were surefire World Series front-runners and legitimate contenders to become the first back-to-back champs since the 2000 Yankees.

By comparison, the Phillies were — and still are — a team of many flaws. They strike out too much. They’re too reliant on the home run. They have almost no team speed. The back of the rotation is underwhelming. The bullpen is generally unreliable. More often than not, they play avert-your-eyes levels of awful defense.

None of those blemishes matter one bit now. The small-sample magic of October can flip any matchup on its head. On Saturday, that happened yet again.

The Philadelphia Phillies — with their Bad News Bears defense and their ragtag bullpen and their season of managerial upheaval — weren’t supposed to be here, weren’t good enough to be here. But postseason baseball doesn’t care.

Today, the Phillies are no longer just an hour away. They’re in the moment, living it, soaking up the mayhem. And the show goes on.

Jake Mintz, the louder half of @CespedesBBQ is a baseball writer for FOX Sports. He’s an Orioles fan living in New York City, and thus, he leads a lonely existence most Octobers. If he’s not watching baseball, he’s almost certainly riding his bike. Follow him on Twitter @Jake_Mintz.

Get more from Major League Baseball

Follow your favorites to get information about games, news and more